Enough is (not always) enough 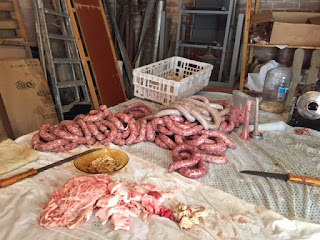 We were dressed in thick sweaters and scarves. It was rainy and cold last Saturday, but that was just as well. You do not want a warm day when you are making sausages! But like the heat attracts the flies, the cold attracts...well: the cold. So there were only four of us healthy enough to attack the meat of a 160 kilo pig from a village nearby - this was just across the border in Spain -  slaughtered by the butcher next door and now waiting to be turned into sausages, sausages and sausages. We made five different varieties, all with the most traditional flavoring: salt/pepper, salt/pepper, salt/pepper, salt/pepper and salt/pepper. The only diffence was the part of the pig, the use of the small or large gut/intestine and the amount of pepper. This is how it has been done by Joan's father, the father before him and before him and...you get the drift by now. So what we did was: cutting, cutting, cutting and cutting. We brought all the meat to the neighour to be grinded and mixed, then we took it back and stuffed it, knotting sting after string and then pricking all the 'tubes' with a pin stuck on a piece of cork and so rusty it must have been part of the great-grandfather's inheritance already.
After 6 hours of work we were cold and smelly; especially the odour of the large intestine is difficult to get off your hands, even though it was soaked in water with fresh lemon juice overnight.
We warmed up by the fire in the living room, drinking wine, wine and wine and eating sausage sausage and sausage. To get through all this meat in a year, you must be a true lover of pork. I had my belly full before the day was done. 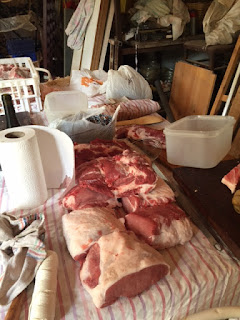 But enough is not always enough as I read in the paper this morning. Recently two guys not far from here were convicted to one year in prison for a theft of:
600 kilos of sausages, 200 kilos of coppa (dried neck meat), 200 kilos of paté, 180 kilos of cooked ham, 80 pots of rabbit paté and 10 kilos of pork's snout salad. They had taken the butcher's refrigerator vehicle to transport it all, but when they set fire to it to get rid of their fingerprints they were injured and consequently caught. But secretly I'm thinking: if I'm not up to it, maybe they'll be able to help out next year.
Gepost door catrien op 17:46 Geen opmerkingen: